Download your data from the VLA Archive; in this example we'll use the publicly available survey AG733, which consists of VLA C-array, C-band (5 GHz) continuum observations of a handful of Seyfert galaxies.

With a little fiddling of the web interface, you should be able to download two archive formatted files: AG733_1 and AG733_2. 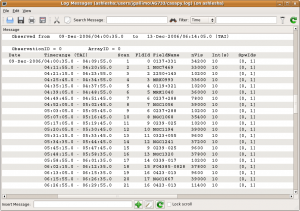 It's helpful to make a subdirectory to store the VLA archive data and the CASA measurement sets before starting CASA. Linux-level commands are given assuming you are using bash as your default shell.

Note that, by convention, UNIX-level commands will be commented out so to facilitate parsing these pages into CASA scripts.

To load the data in CASA, we employ the importvla 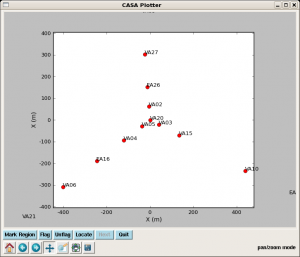 Graphics window produced by plotxy. Shown are the antennas of the VLA for the program AG733.

The output measurement set, i.e., the data to be worked on, is ag733.ms. Note that the (interesting) output of listobs and vishead go to the CASA message log window.

Listobs is similar to LISTR in AIPS and provides a list of scans, sources and their respective indices, and antennas. You can also get a more useful plot of antennas, akin to the output of the AIPS task PRTAN, using (the perhaps soon to be defunct) plotxy. The antennas aids the selection of a reference antenna; the antenna VA05 looks like a reasonable choice.

It's worth getting out of CASA to use the (currently independent) tool casaplotms.

There are also ways of running casaplotms from a shell escape in CASA, but never mind that. 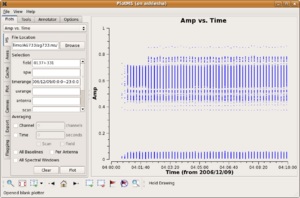 In the example shown, the data were already edited. No obviously bad data remain. Note that the low points are actually cross-polarization data; at the time of this writing, casaplotms (in beta) could not yet select by polarization. Nonetheless, for the sake of this example, we'll clip out the early part of the observations.

Firstly, box the region to be flagged by using the "Mark Regions" button

. Next, press the Flag button

to zap those data.

There are currently plenty of options to explore your data, but for now it should suffice simply to go through and zap obviously bad data on individual sources and calibrators, one at a time.

Please don't make the same mistake I did

At press time, Casaplotms plots all of the data, including cross-polarization. All those seeming zeros in your data are probably not junk. They are real cross-pol data. Flagging those data will cause grief later on. Tread lightly!

CASA uses python as an interactive wrapper and scripting language. Python offers the ability to define global variables on the fly, and it's worth using such variables to take care of bookkeeping. First we'll define some list variables that store calibrator and source information.

It will also be helpful later to have a way of referencing which phase calibrator should be assigned to which source. We can define the matching explicitly by using a dictionary variable.

Those variables being defined, we can proceed with the calibration (and not have to type source and calibrator names over and over).

For this example, we'll determine the calibration in reference to a model image of the calibrator source. Look at the inputs of setjy and get it ready to go!

That example was set up to demonstrate some AIPS heritage. You could equally well run setjy the following way.

At this stage the data have an overall flux scaling determined, but full gain solutions aren't there yet. The relevant task is gaincal (analogous to the AIPS task CALIB).

Rather than generate solution tables (SN tables in AIPS) that are attached to the measurement set, gaincal will produce a separate table, which we'll call cal.G.

There's some python trickery buried in this example. If you are unfamiliar with the string method join, try the following example. Recall that we had defined the variable allcals above in A Python Interlude.

It's worth playing with the timerange, etc. in plotcal to explore the solutions. You may notice that the antenna 'EA26' looks a little junky on the second day. Here's how to flag it manually and then repeat the calibration.

Go back and re-plot the calibration; this example shows even more AIPS heritage.

Finally, bootstrap the flux scale of the flux calibrator onto the phase calibrators. AIPS called it GETJY, but CASA calls it fluxscale.

Here, the calibration table cal.G is modified and stored as 'cal.Gflx.' So far, solutions have been generated only for the calibrators, and they have not yet been transfered to the sources.

We could equally well have used reference='0137+337', but use of the join method allows for the more general possibility of multiple flux calibrators.

In this example, the solutions in cal.Gflx will be incrementally compiled into a new calibration table called multisource.gcal. 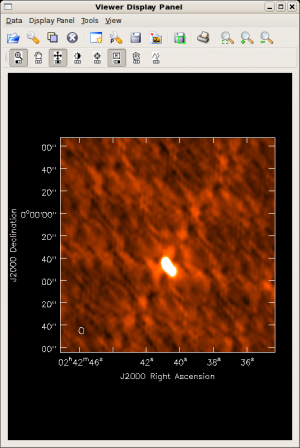 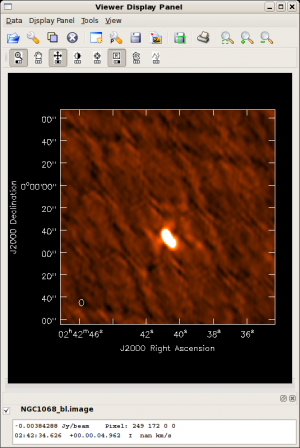 Although it makes only modest improvements for the present example, observations including a mix of EVLA and VLA telescopes may benefit from performing baseline-based corrections on a strong calibrator. Now that we have initial antenna-based solutions, we can use blcal.

This operation generates the calibration table cal.BL. Solutions can be inspected with plotcal. Now we have to use applycal again to apply both the antenna-based and baseline-based calibration solutions to the data.

Did the blcal operation make a difference here? Getting ahead of ourselves a little, the plots at right show the initial clean images of NGC1068, one with blcal applied, and one without, and both images are displayed with the same stretch. There does appear a slight reduction of artifacts with blcal applied, but of course your mileage will vary.

Splitting the calibrated source data from the multisource measurement set

To split the calibrated source data out of the measurement set, use the CASA task split.

Alternatively, you can take advantage of scripting to loop over the sources.

Use clean for imaging and clean deconvolution. Like IMAGR in AIPS, it's worth some time mulling over all of the options. A complete list of keywords is given in the example, below. Most of the options should be relatively familiar to the AIPS user, but one keyword bears mentioning in this example: calready = True. By selecting this option, the CLEAN model is transformed back to (u,v) space and stored as as a new column in the visibility data. The transformed CLEAN model will be necessary for self calibration, described below.

For this snapshot survey, the example chooses a fairly conservative, slow clean to accommodate the less-than-ideal beam.

Take a look at the image using viewer. 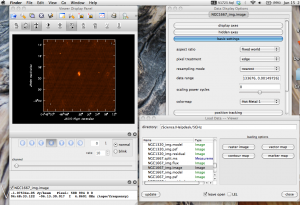 An example desktop display of viewer, showing the image display panel, the data display options window, and the data loader.

From the GUI, select the .image file you want to view, select Raster Image, and then dismiss and close your way through to the display.

At this point we have a set of calibrated visibilities (the "splits") and a set of images. There's not much more that can be done for the fainter sources, but the brighter sources will almost certainly show some residual calibration artifacts that can be cleaned up with self-calibration. The strategy is to repeat using the primary calibration application gaincal, only this time we use the source itself as a calibrator.

NGC 1068 is a good example of a difficult source. Firstly, it's very bright, so residual phase calibration errors should be obvious. Secondly, like the larger fraction of the sky, it's located painfully close to the celestial equator, meaning that the (u,v) coverage is particularly poor.

To view the calibration artifacts, use viewer to display the image of NGC 1068, but adjust the display levels so that the displayed image saturates at 10 mJy. To do this, select the leftmost button bearing a wrench icon. The "Data Display Options" GUI opens, and you can enter the desired display stretch in the Data Range text box. To cutoff the stretch at 10 mJy,

You can see some residual systematics in the background and sidelobe artifacts that suggest the phase calibration isn't as good as it might be.

The process of self-calibration will involve iterating between (i) improved CLEAN models of the source (which are updated in the "split" visibility file so long as calready = True) and (i+1) improved calibrations generated by gaincal. For simplicity, in this example we will repeatedly generate new calibration tables so that we can avoid using accum.

In principle, we could start with the initial CLEAN model that we generated above. For this example, we'll take a more cautious approach and re-run clean interactively.

The trick to interactive cleaning is to draw clean boxes around the sources as they appear in the residual image. By default, clean boxes are set by right-clicking on the image and dragging. The box can be edited until you double right-click inside the box, which then sets that box for cleaning. Press the green icon to continue cleaning the image; on the next major cycle, a new residual map will be displayed, affording the option to add clean boxes as new sources appear where they were once swamped by sidelobes.

Of course, for self-calibration, it pays to stop the cleaning early when artifacts start to appear in the residuals!

To start, we should already have a clean model for NGC 1068 stored in the visibility database. Now we can set up gaincal.

Pause for Reflection and Troubleshooting

And now we can generate a new CLEAN model.

Assuming things are going well, we can now continue to repeat the process until we are satisfied with the image.

And so on, decreasing the solution interval as much as the S/N and sampling allow.