The goal of this tutorial is to provide a complete run-through of a relatively simple simulation. Included in this simulation are the effects of (u, v) sampling of a 50-antenna ALMA, the primary beam of the ALMA, and thermal noise. Neither calibration overheads nor errors are included, and so this simulation should be viewed as optimistic.

For this tutorial, we'll use the BIMA SONG (Helfer et al. 2003) observations of M51 as the basis for the model. Grab the file NGC5194.bima12m.cm.fits.gz and uncompress it in a working directory.

Load these data into CASA. For convenience, store the name of the resulting measurement set into the python global cubeName.

The input model is actually an observation and, as such, certainly contains noise. We're OK as long as the noise in the model falls below the expected thermal noise of the ALMA observation. Here's a quick, back-of-the-envelope calculation.

The noise on the BIMA SONG channels measures roughly 0.1 Jy/beam, which scales to 0.04 mJy/beam at z = 0.1 (to within factors of powers of 1+z for cosmology and root-small-integer for the to-be-degraded beam; see below). For comparison, the expected thermal noise of the ALMA observation is 0.1 mJy / beam (using the ALMA Sensitivity Calculator, assuming 8 hrs integration, and, to match roughly the BIMA SONG observation, a 4 MHz channel width), a factor of 2.5 greater than the anticipated contribution of noise from the model. Added in quadrature, the noise components total 0.108 mJy, and so we can expect that the input model noise degrades the simulation noise by about 8%.

Next we'll set up some python globals to handle the scaling of the model coordinates and flux densities appropriate for new redshift. We'll primarily need the angular size and luminosity distances for a given cosmology. To keep things simple, we'll use Ned Wright's CosmoCalc (2006) with the default cosmology; redshifts were collected from NED.

The convention is old refers to M51 as observed at its proper redshift, and new refers to the new, higher redshift for our model.

The sky coordinates axes of the model need to be adjusted (1) to place M51 in the southern hemisphere and (2) to correct for the new angular size distance. These tasks can be accomplished by appropriate header modifications; to perform task (1), we'll just flip the sign of the declination using imhead.

Next, adjust the pixel scale for the new angular size distance. To perform this adjustment, we'll use imhead with mode = "get" to read in the original pixel scale, and mode="put" to store the new pixel scale in the model header.

The frequency axis pixel scale also needs to be corrected by (1+z), but there's a slight problem. Simdata needs to read the channel width from the header to estimate the thermal noise of the simulated observation. Unfortunately, simdata currently (CASA 3.0.1) accepts only positive channel widths from the header for the purposes of calculating thermal noise, but the BIMA SONG data have a negative channel width, because the data are organized in increasing velocity = decreasing frequency. One solution would be to rearrange the model cube in increasing frequency order, but, to keep things simple, we'll just change the sign of the frequency axis and accept the small error introduced into the frequency scaling and the flip of the orientation of the kinematic line of nodes.

The CASA task simdata will monolithically simulate an ALMA observation, produce measurement sets with and without thermal noise, and finally produce a CLEANed image cube based on the simulated observation. Details can be found in the Simulating Observations in CASA tutorial.

We also need to estimate the desired synthesized beam size. We don't want the new beam to be so large so that we cannot resolve a rotation curve, but we also don't want it to be so small that we effectively resolve out the BIMA SONG data. The BIMA SONG beam was 5 arcsec, and so as a reasonable guess we'll adopt the equivalent of a 15" beam at its true distance(3 times coarser than the BIMA SONG beam) and then scale appropriately to z = 0.1.

Now we know both the image size and pixel size in arcseconds, but simdata wants the ratio: the number of pixels along the RA or Dec axis. To keep the image from becoming too small, set the minimum image size to be 256 pixels.

Now we have enough information to run simdata, and hopefully some of the python global variables that were defined above will start to make sense. The following CASA abd python commands set up the parameters for the simdata task.

This tutorial is somewhat automated to produce a decent cube of M51 as viewed at z = 0.1. The selection of the ALMA antenna configuration is automated, but, for other simulations (or this one, for that matter), it will be worth playing with the configurations, or perhaps evaluating the possibility of detections in CSV or early science.

There are also configuration data for the ACA, EVLA, and SMA.

The rest frequency will have been lost in the simulation, and it's worth restoring to the header.

Use immoments to calculate the integrated intensity and velocity field maps from the simulated cube. The excludepix option applies a 3σ cut.

The results are shown at right.

We'll leave it as an exercise how to tune this simulation to push M51 all the way out to z = 0.3 (luminosity distance = 1540 Mpc). Simdata produces a reasonable detection in 8 hrs integration, but you'll need to consider more carefully the antenna configuration needed to produce the requisite sensitivity. To conclude, here are the moment maps for the z = 0.3 simulation.

this fits file is a model of a protoplanetary disk from S. Wolf. ** If you use it for anything more than learning CASA, please cite Wolf & D'Angelo 2005. 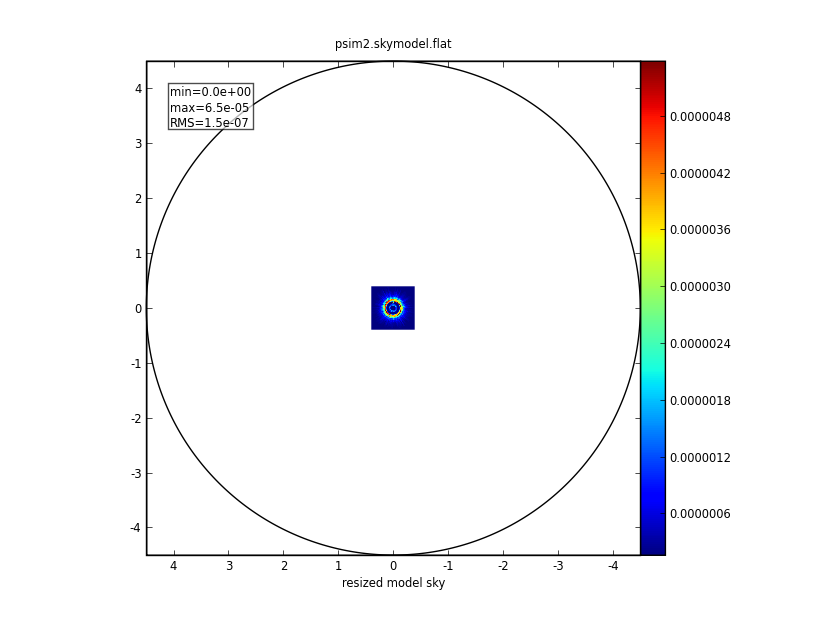 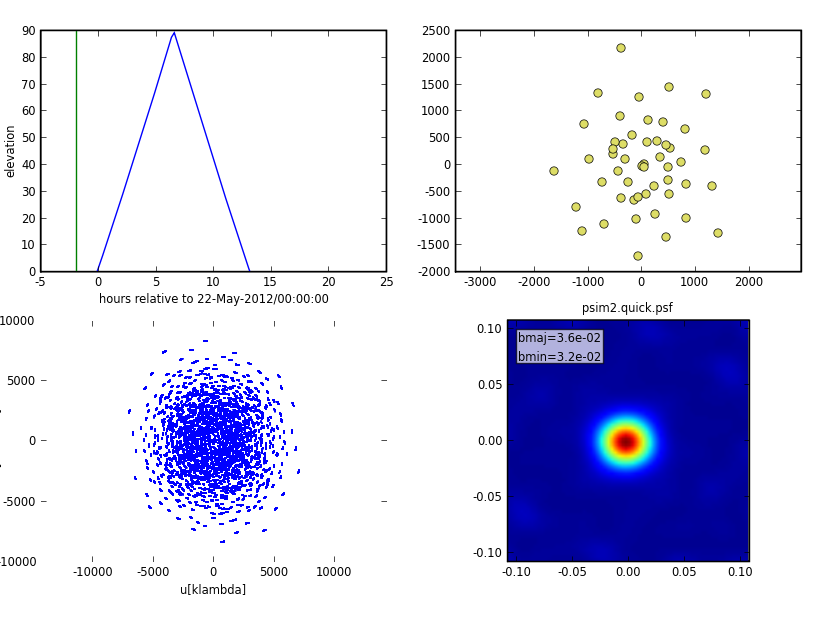 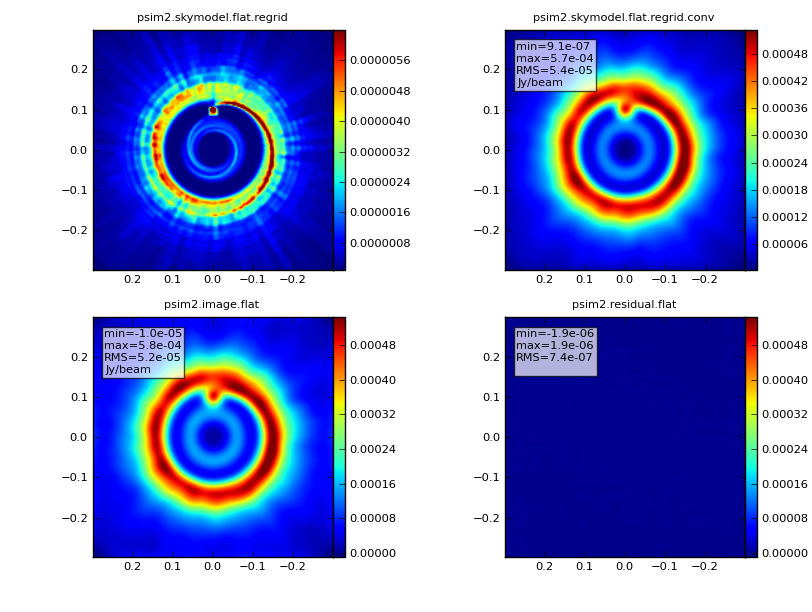 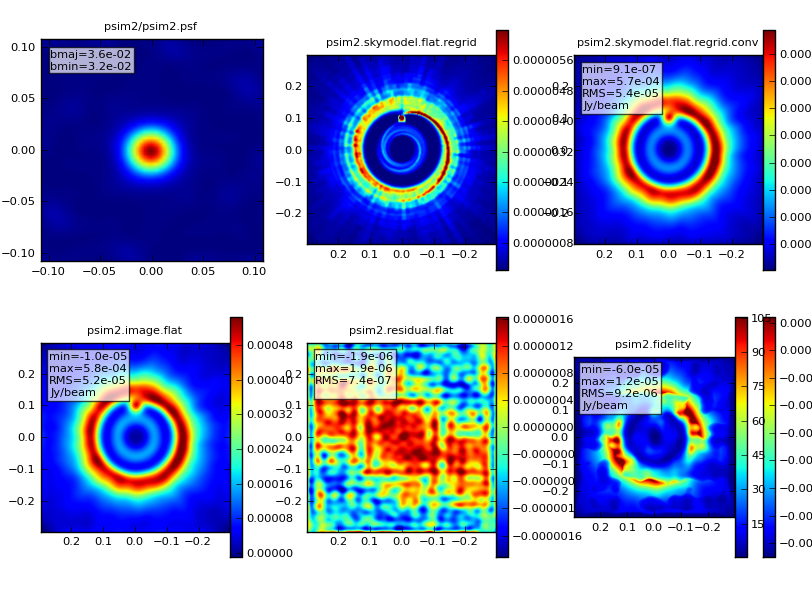 simdata (old task) version of script and output: (No, I don't know why the difference image looks like that. I haven't seen such behaviour in simdata2) File:Ppdisk.simdata.txt 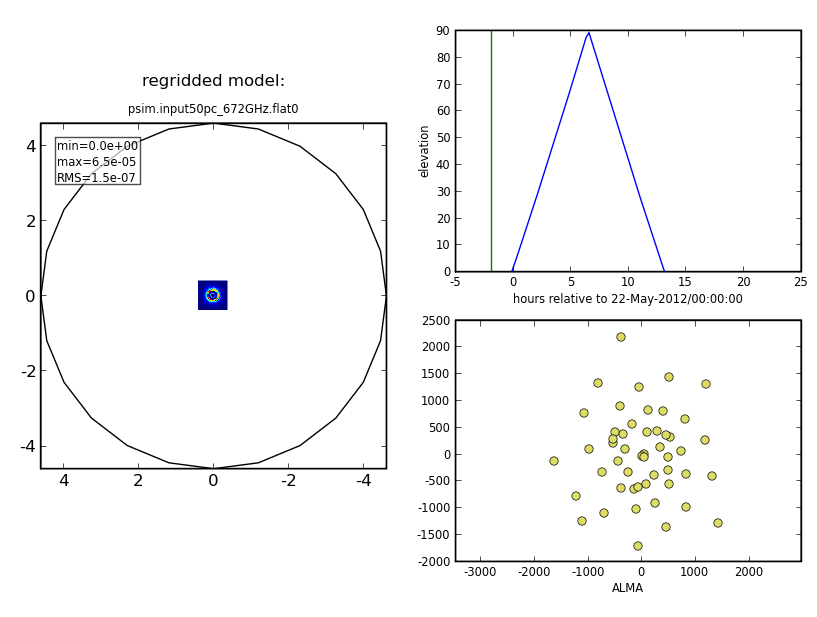 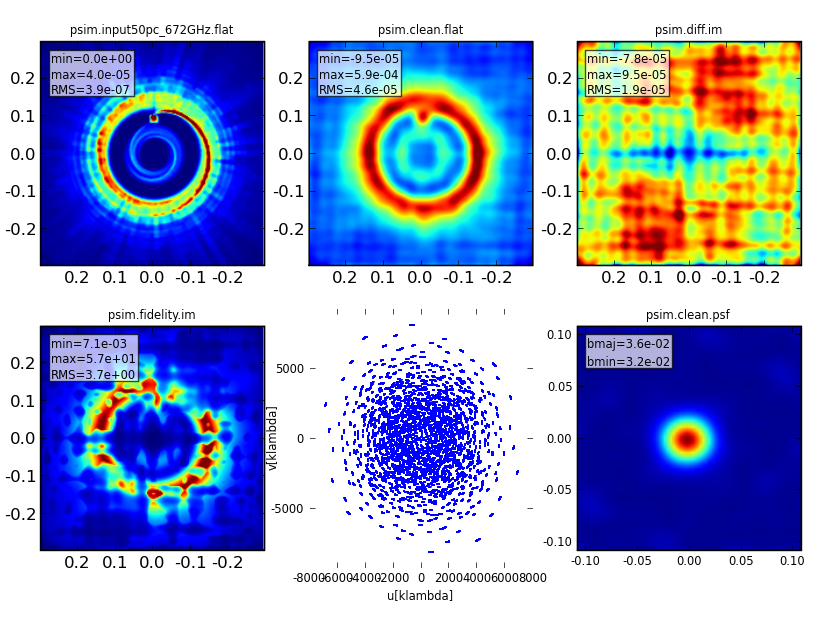 will we be dominated by the noise in the input model?

here's the cube with the simdata's scaling and World Coordinate System: 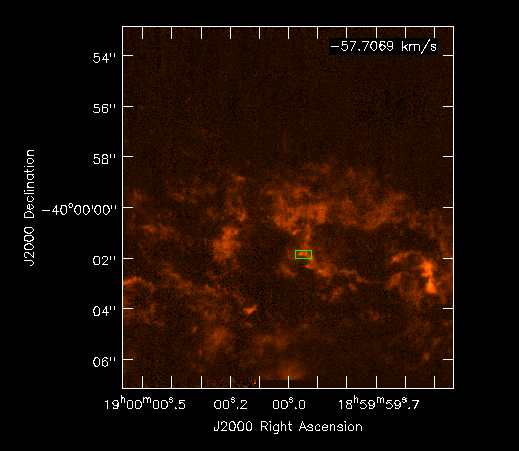 and a spectral profile in the box marked in green 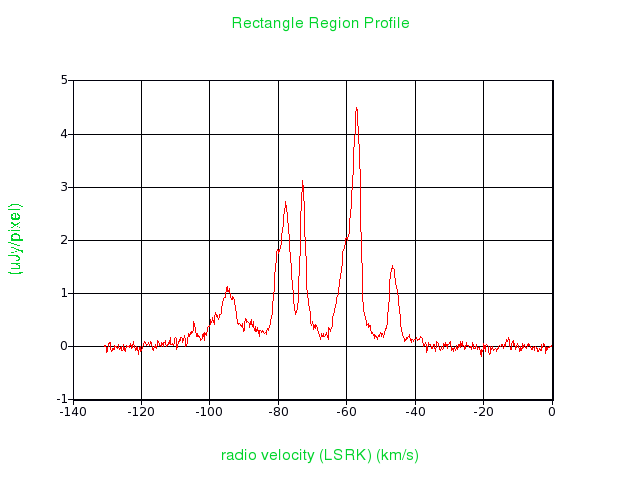 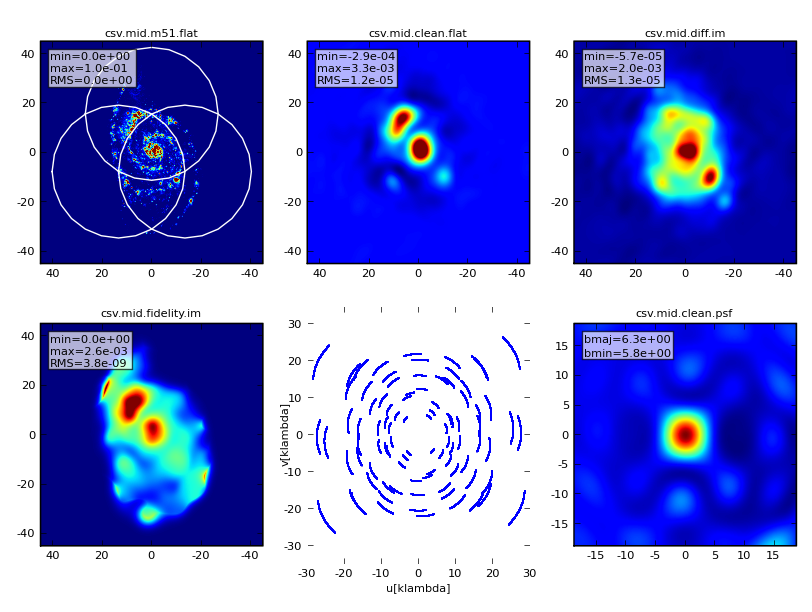 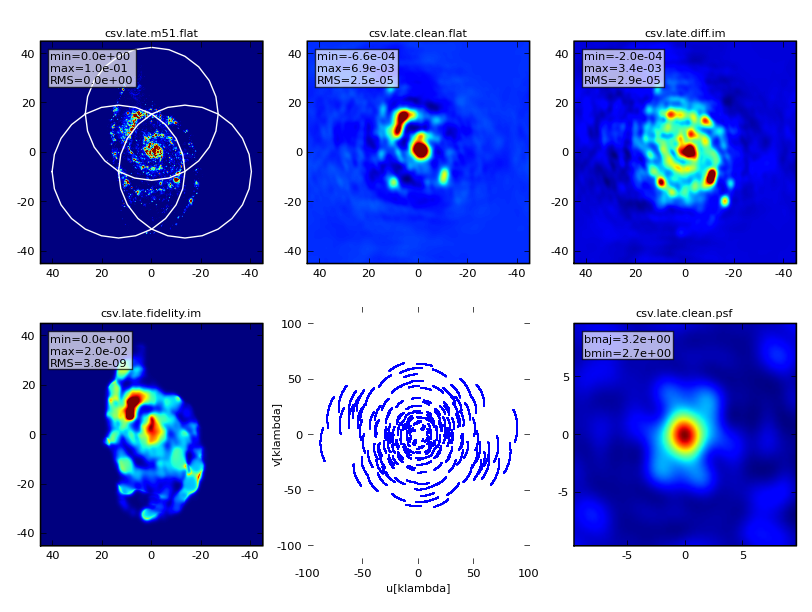 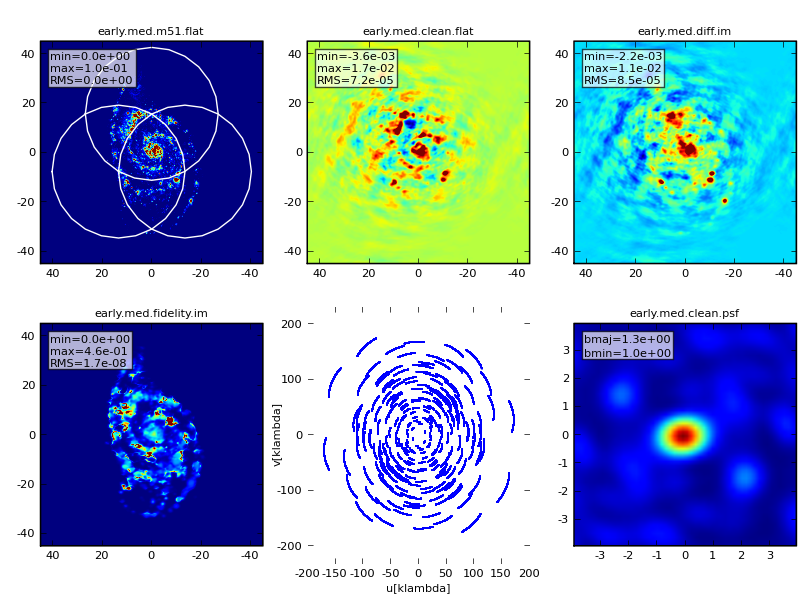 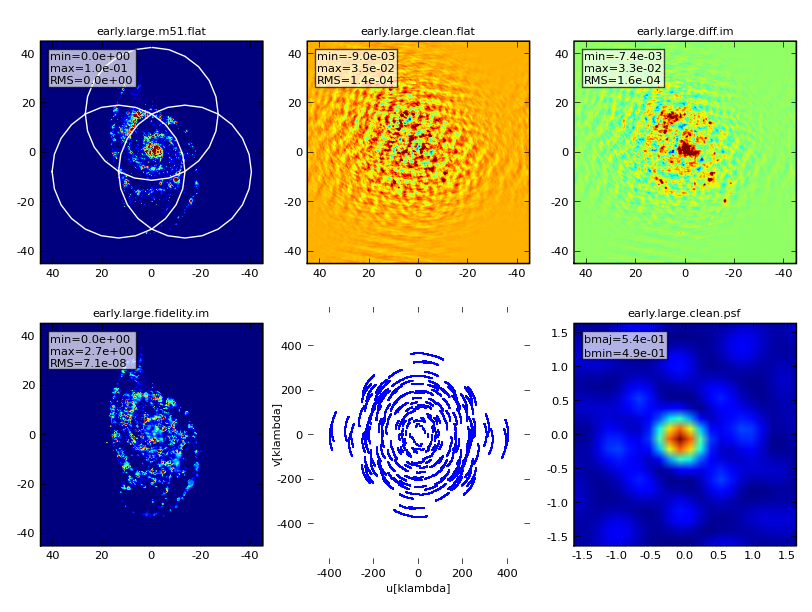