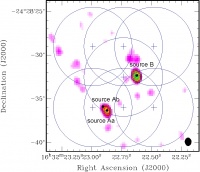 The tutorial (called a casaguide) for reducing these data using CASA version 6.4.1.12 has been split into calibration and imaging pages:

1) IRAS16293 Band9 - Calibration for CASA 6.4 : This section of the tutorial steps you through inspection and calibration of the basic visibility (u-v) data. To complete this part, you will need the data in the first directory: IRAS16293_Band9_UnCalibratedMS.

NOTE: CASA 6.1 or later is required to process the data using the guides above (see the CASA download page to obtain the most recent CASA version).