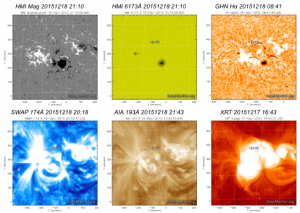 The tutorial (or casaguide) for reduction these data using CASA version 4.7 or 5.1 has been split into calibration imaging and feathering pages:

4) Sunspot_Band6_Feathering_for_CASA_4.7 This section of tutorial focuses on the “feathering” process from the synthesized image and single-dish map. To complete this section, you will need the fully-calibrated visibility data in the Sunspot_Band6_CalibratedData directory, and carry out the process described in 3).

We also provide the final intensity images in the Sunspot_Band6_ReferenceImages directory.

For the tutorials, both of CASA 4.7 (or later) and Analysis Utilities [2] package are required.