To determine the zero spacing flux density on a given date, one can use the predictcomp CASA task. It is essential that a valid time is also given. A valid ALMA configuration file must be used, but the zero spacing flux should not depend on this choice. For example, to get the value for Titan on March 1, 2013 you can use 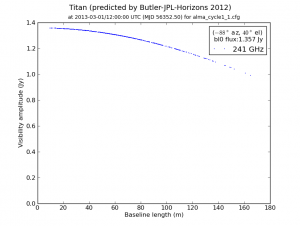