The detailed radio wavelength spectral energy distributions, including time variability, and contributions from molecular line emission of Solar System Objects (SS Objects) is an active field of astronomical research. In preparation for ALMA commissioning and Early Science an initial set of Solar System Object models were compiled called Bulter-Horizons-2010. These models represented what was known at that time about the millimeter to submm behavior of the most useful SS Objects. All Science Verification and Cycle 0 data were calibrated with the Bulter-Horizons-2010 models and CASA 3.3 or 3.4. With the wealth of new information now available from telescopes like Herschel, along with more detailed models of some of the more prevalent atmospheric spectral lines in SS Objects, the models were updated for the CASA 4.0 release. The new models are called Bulter-Horizons-2012 and represent the current best understanding from published or publicly available work. A memo describing the details of how the models themselves and how they work in CASA can be found in the ALMA Memo Series at: https://science.nrao.edu/facilities/alma/aboutALMA/Technology/ALMA_Memo_Series/alma594/abs594 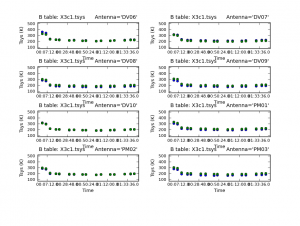