To run a task, just type its name at the CASA prompt. For instance

Now tell simdata where to find the model (input) image and how to scale it appropriately for our purposes. Just to be safe, we'll first restore the default values of simdata.

The 8 micron emission is probably not a great proxy for the millimeter emission from 30 Doradus. For a true science case, one would want to calculate what the expected 230 GHz emission would be from an object like this at the distance of about 750 kiloparsec. For the sake of simplicity, we will rescale the image so that the brightest pixel in the map has a flux density of 0.1 mJy. This number is chosen such that the extended emission is a factor of a few brighter than the expected noise in a 2 hour observation.

We will set mapsize to (blank) to cover the entire model, which in our case will require a mosaic of 6 pointings (as we will see later on). The mosaic default pattern "maptype" is 'hexagonal', which we will leave unchanged.

Finally, we will change the value of "pointingspacing" to (blank) to set the pointings to be half a primary beam apart.

Now we will consider the parameters within "predict". We will keep the default values for every parameter except "antennalist", which tells simdata the locations and sizes of each antenna in the array. We will simulate an Early Science observation, so we will first find the location where CASA has stored the ALMA configuration files. Then we will tell simdata to the the configuration file designed for Early Science.

Now that simdata has made the mock visibilities, it is time to invert them to make an image of sky as observed with the interferometer.

We would like to make a deconvolved output image, but we don't want to spend too much time optimizing the cleaning. So, all we need to do is set "clean" to true and leave all of the other parameters at their default values. Other data reduction guides describe the process of cleaning in greater detail.

For simulations intended for a proposal or scientific analysis, one would want to choose a more appropriate cleaning treshold and define the region to be cleaned. 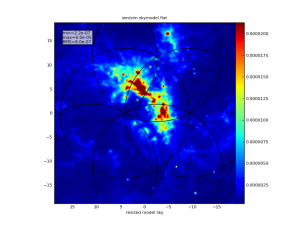