This portion of CASA Guide will cover the data reduction of the Total Power (TP) array observations of M100. The data consist of "amplitude calibrator" datasets (containing observational data of the quasar 3C279) and "science" datasets containing data for the science target M100. The data are reduced in the following steps:

The combination of the resultant image with the interferometric (12-m array and 7-m array) data is explained in a separate page, valid for both CASA versions 4.3 and 4.5 M100_Band3_Combine_4.3.

Confirm Your Version of CASA

This guide has been written for CASA release 4.5.0. Please confirm your version before proceeding.

The observations were made on the 1st, 5th, 7th, and 17th July 2014, using two or three 12-m antennas and the ACA correlator. The table below indicates the ID's of the Execution Blocks, their start and end times, and the antennas in the array. There are nine science datasets (i.e., two or three per day).

Here we define the list of the Execution Block ID's of the science datasets, to facilitate data reduction using for-loops.

Calibration into Brightness Temperature in Kelvins

In this section, the data are calibrated into brightness temperature in units of K.

This is done in the steps that are described below, using uid___A002_X85c183_X36f as an example. If you wish to simply calibrate the data without working through the steps, you can instead execute the script A002_X85c183_X36f.ms.scriptForSDCalibration.py using the execfile command.

The first thing to do is to convert the dataset into the CASA Measurement Set (MS) format. The raw data have been provided to you in the ASDM (ALMA Science Data Model). It is the native format of the data produced by the observatory but cannot be processed by CASA. The conversion from ASDM to MS is done with the task importasdm.

The converted dataset (with a suffix ".ms") is created. Then some sort of flags embedded in the binary files in the ASDM dataset (so-called "BDF flags") are transferred to MS using the command bdflags2MS.

The usual first step is then to get some basic information about the data. We do this using the task listobs, which will output a detailed summary of each dataset supplied.

The output will be sent to the CASA logger, and also written in a file named uid___A002_X85c183_X36f.ms.listobs. You can print the contents of the file to the terminal by typing:

Alternatively you can use your favorite pager or editor, instead of "cat" command.

Here is an abridged example extracted from the output from listobs for uid___A002_X85c183_X36f:

From this output you can for example see the followings.

The scan pattern of the raster mapping can be visualized by issueing the following command. A plot will be shown in a window and also saved as a PNG file uid___A002_X85c183_X36f.ms.sampling.png. 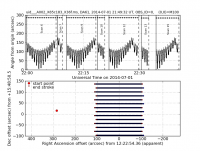 Let's start by checking the Tsys. We use the task gencal to extract the Tsys into a CASA calibration table. This table is only used for plotting and for letting CASA figure out the mapping between the science and Tsys SPW's (see "Tsys Calibration" section). 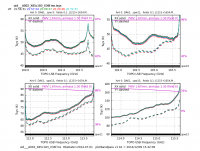 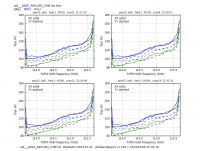 Now we do some a-priori flagging of the edge channels. Although the "science" SPW's have 1992 MHz bandwidths with 4080 spectral channels, their edge channels are very noisy, because each intermediate frequency signal path (baseband) is equipped with a bandpass filter of ~1.8 GHz width. We flag 120 channels on each side of the "science" SPW's. As a result 3840 channels (1875 MHz bandwidth), i.e., the same number of channels and bandwidth as FDM SPW's in the 12-m array data, remain in each SPW.

We calibrate the data into brightness temperature in units of K, using the equation Ta* = Tsys*(ON-OFF)/OFF, where ON and OFF are the data on-source (i.e., during the raster scanning) and off-source (on a reference position where only background emission exists), respectively. The calibration is done by the task Template:Sdcal2. It requires the list of the "science" SPW's and Tsys SPW's, and the correspondence between them. We can tell from the listobs (or sdlist) output that Tsys SPW's 9, 11, 13, and 15 correspond to "science" SPW's 17, 19, 21, and 23, respectively; but the function tsysspwmap helps to map Tsys SPW's to science SPW's in an automated way:

The obtained variable tsysmap is a list which looks like as follows. The N-th (counted from 0) item indicates the Tsys SPW corresponding to the SPW ID N, e.g., the 23rd item is 15, thus the Tsys SPW 15 corresponds to the science SPW 23.

Now this information needs to be translated into a dictionary variable which Template:Sdcal2 requires. The mapping between the science SPW's (17, 19, 21, and 23) and Tsys SPW's is given by the following piece of code:

The obtained correspondence between Tsys and science SPW's is stored in the dictionary spwmap which looks like the following:

This is given to sdcal2, along with the comma-separated lists of SPW's. An important parameter of the task is calmode. In case of the science dataset uid___A002_X85c183_X36f, calmode should be set to 'ps,tsys,apply'. 'ps' means that the data at dedicated reference position are used as "OFF" for the OFF subtraction, (ON-OFF)/OFF. 'tsys' is to calibrate the data using Tsys. 'apply' is to apply both calibrations above (OFF-subtraction and Tsys).

A new ASAP dataset with additional suffix '.cal' is generated for each antenna. Before proceeding to the next step, we can plot the calibrated spectra using the SDcheckSpectra function of the Analysis Utilities. PNG files will be created in, e.g., uid___A002_X85c183_X36f.ms.DA61.asap.cal.plots directory. You will find the CO line in SPW 23 of the science datasets. 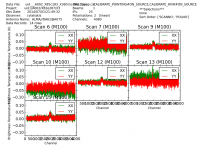 Note: For amplitude calibrator datasets, (as opposed to science target maps) the calmode option for sdcal2 should be 'otfraster,tsys,apply' ('otfraster' instead of 'ps'). 'otfraster' tells the task to use both ends of each raster row as "OFF" data (as opposed to a dedicated "OFF" sky measurement). This is because temporal fluctuation of atmospheric emission is the dominant source of noise in radio continuum observations, and hence the "OFF" needs to be as close as possible to the "ON" in time (and spatial location).

In the period of Early Science Cycle 1/2, single-dish data taken with the ACA correlator suffer from non-linearity which originates in the digital signal processing. Its impact was thoroughly studied both experimentally and theoretically, and it was concluded that multiplication by a correction factor of 1.25 yields an amplitude accuracy of +/-5%. This correction is done by the task sdscale. A new ASAP dataset with additional suffix '.nlc' (for Non-Linearity Correction) will be created for each antenna.

An upgrade of the ACA correlator hardware and software is expected to solve the non-linearity issue. Thus this step will become unnecessary for data taken in the near future.

Baseline Subtraction (only for Science Datasets)

We will subtract spectral baselines using the task sdbaseline. With the option "maskmode='auto'", the task automatically finds line features from individual spectra and excludes them from baseline fitting. A caveat is that the line finding may not work very well in some cases, including this dataset (see "Subtract a Residual Background from the Image" section below).

Datasets with yet another suffix ".bl" are generated. The spectra can be checked using SDcheckSpectra which we have already used in a previous step. 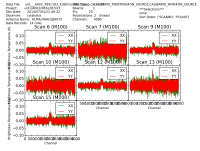 Now the calibrated data need to be coverted back to the CASA MS format, because the imaging task (sdimaging) only accepts MS. The CASA task sdsave will do this.

And concatenate the data which were split by antennas, using the task concat.

We do not concatenate separate Execution Blocks, because we need to determine and apply day-by-day Jy/K conversion factor.

At this stage you should have run all 9 science datasets through their respective scriptForSDCalibration.py, i.e., all 9 datasets have been calibrated into units of Kelvins. The next step is to apply Jy/K conversion factors that have been derived from observations of an amplitude calibrator (one Jy/K value determined per day and per SPW). The resulting Jy/K values are given at the end of this section.

If you want to know details of how the Jy/K values are determined, a summary is given below. Otherwise, you can skip ahead to the next section M100_Band3_SingleDish_4.5#Convert the Science Target Units from Kelvin to Jansky to continue the calibration.

Determination of the Jy/K conversion factor is achieved by imaging a source whose continuum flux is known and measuring the observed brightness temperature. One observation of this source - the amplitude calibrator - was made per day, giving a total of four datasets:

The true size of the beam (point spread function), on which the Jy/K value depends, in a map is determined be several ingredients.

The Analysis Utilities provides several tools to get estimates of these.

The resulting Jy/K values are as follows. Note that the values for individual antennas are averaged for each day, each SPW, because the antennas used for the Science observations were not necessarily available for the corresponding amplitude calibrator observations.

Convert the Science Target Units from Kelvin to Jansky

Define the lists of SPWs and corresponding Jy/K factors to process the data using for-loops.

Make a copy of calibrated dataset, with an additional suffix ".jy", and multiply the Jy/K value for each SPW. This is done by the scaleAutocorr function of Analysis Utilities.

The Analysis_Utilities package will be used for the following processes. Import the package and instantiate the stuffForScienceDataReduction class therein.

Define the list of the calibrated science datasets, which the CASA task sdimaging accepts.

Obtain the data sampling and determine the cell spacing and map size based on the mean frequency of the target SPW. This part is in principle the same as the corresponding procedure in the "Optionally Image the Amplitude Calibrator and Measure the Value of Jy/K" section. Please refer to the script "ScriptForImagingAmpCalAndDerivingJyPerK.py" used there.

Note: The Jy/K value depends on the parameters of gridding convolution (i.e., "gridfunction", "cell", and function-specific parameters ["convsupport" for gridfunction='SF']). That is, the same gridding parameters should be used for both amplitude calibrator and science images -- otherwise the calibration into Jy unit becomes invalid.

The produced image has the brightness unit of K in the image header, which is not correct. Modify the header using the task imhead.

(Optionally) Subtract a Residual Background from the Image

Now you can browse the data cube using the viewer.

If you plot the line profile using the viewer, you may notice that the background (i.e., line-free channels) level is slightly negative. To correct this, spectral baselines are subtracted from the image using the task imcontsub.

The main cause of the negative baseline is the following. The task sdbaseline with maskmode='auto' is supposed to find lines from the data and exclude the detected lines from baseline fitting. However, the CO line from M100 is not bright enough to be detected from individual spectra (1-s integration), and hence sdbaseline included the velocity ranges of the line into baseline fitting. The impact of this effect would be smaller if the line is brighter, or narrower w.r.t. the correlator bandwidth.

The image does not have the beam size, which is necessary for combining the image with interferometric data, in the header. The beam size (including the broadening due to gridding convolution and data sampling) is calculated using the function sfBeam of the Analysis Utilities and then written into the header using the functions of the ia tool.

Quick Look at the Results

If you wish to learn how to combine the Total Power data with interferometric 12m and 7m data, see the guide for Data Combination M100_Band3_Combine_4.3