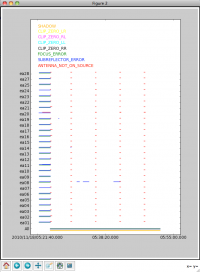 Unfortunately, since we requested time-averaged data from the archive, the flagged data are not included in the MS. If you are concerned about the possible erroneous deletion of good data, it's best to download the complete MS, inspect it with plotms (see Inspecting_Data#Graphical_display:_plotms below), and then perform time and / or frequency averaging.