This command produces a naturally-weighted image 512x512 arcsec in angular size, which has been cleaned down to a threshold of 50mJy (about 2 sigma) and has been primary-beam corrected (see 'minpb' and 'pbcor'): 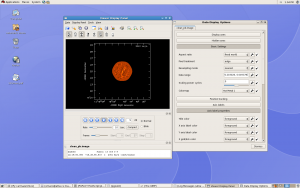 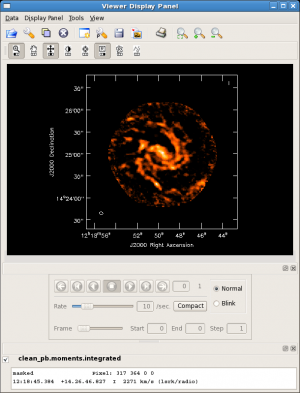 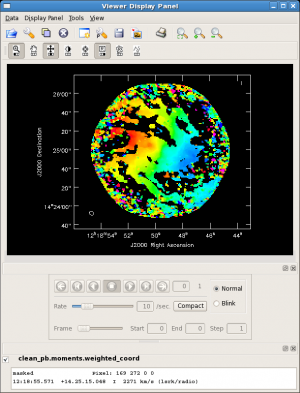 In addition to basic file selection commands, the upper part of the Viewer Display Panel includes various image display tasks (e.g, zoom, rectangle region select, contrast) that can be assigned to different mouse buttons by clicking on them with the desired mouse button. The lower part of the Viewer Display Panel provides buttons which allow you to navigate between spectral channels, and the coordinate and flux information of the pixel under the cursor is displayed at the bottom of this window. The Data Display Options window (which appears after selecting 'Data' > 'Adjust' from the top menu bar) allows you to adjust the data range for the color scale as well as a number of plotting options (e.g., whether information about the third dimension of the cube is displayed in the upper right corner, and in what units.)

To create moment maps of this data cube, use the task immoments:

Note:As is typical for creating integrated intensity and velocity field maps in this way, a higher cutoff (larger upper value in 'excludepix') is desirable for the moment=[1] map; this can be seen by looking at the output moment 1 map (*.weighted_coord), which is still too noisy at a 3-sigma cutoff, though the moment 0 map looks pretty clean. It may be desirable to run immoments multiple times with different inputs to create each moment image. The task immoments also allows the user to specify a mask, select a subset of channels, or a region defined with the viewer, if more control is desired over the data to be used in the moment calculations.