Difference between revisions of "Imaging a Mosaicked Spectral Line Dataset"

Special note as of Feb 2010: A bug in one of the routines which assembles data (likely concat) may create problems if your dataset contains spectral windows with differing numbers of channels, e.g. if you have a wideband mode with a smaller number of broad channels to calibrate your narrowband windows with lots of channels. The recognizable symptom is an immediate, severe "table conformance error" that returns you to the CASA command line. Making an MS containing only the narrowband channels (presumably, each having the same number) using split will solve this problem. 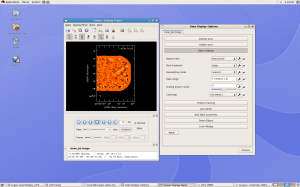