Concat with 1/sigma2 scaling of Weights 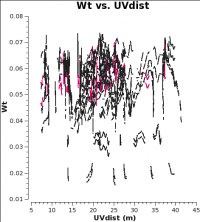 When combining data with disparate properties it is very important that the relative weights of each visibility be in the correct proportion to the other data according to the radiometer equation. Formally, the visibility weights should be proportional to 1/sigma**2 where sigma is the variance or rms noise of a given visibility.

Applycal with calwt=True for Amplitude Gain

Because it had not been thoroughly tested, the standard procedure for applying amplitude tables *pre-*CASA 4.2.2 was to set calwt=False for the amplitude gain table. However, the ALMA pipeline is using calwt=True as this alleviates the need to apply additional weight scaling due to differences in antenna size when combining data.

In summary if CASA 4.2.2 is used to import the data AND calwt=True is used to apply the amplitude calibration, no additional weighting should be required to combine 7m+12m ALMA data.