(A) For data calibrated by the 4.2.2 CASA Pipeline the weights are further modified by [gain(i)2 * gain(j)2] when the amplitude gain table is applied using calwt=True. Since the amplitude gains are directly proportional to the effective Antenna area, scaling the weights by the amplitude gains will take into account antenna size differences, and also down-weight antennas with comparatively low gain. Thus, these weights are completely correct (but see Absolute Accuracy of the Data Weights).
(B) For data manually calibrated in CASA 4.2.2, unfortunately calwt=False was still used to apply the antenna gain table, thus, these data have weights that are not correct in a relative sense when compared to other data with different antenna size by the factor [gain(i)2 * gain(j)2].

CASE 3) CASA 4.3 and later: Data calibrated in either the pipeline or manually will have completely correct weights (but see Absolute Accuracy of the Data Weights). An example of this situation is demonstrated in https://casaguides.nrao.edu/index.php/M100_Band3_Combine_4.3

First, remember that good imaging performance requires that the relative weights be correct for all data included in the imaging. For all of the situations below, the data are sufficiently internally consistent that they can be imaged fine on their own or with other data that share the same situation and have the same data properties. Problems arise when data are combined that (a) do not share the same weight situation and/or differences in antenna size, visibility integration time, or channel bandwidth are not accounted for.

Absolute Accuracy of the Data Weights 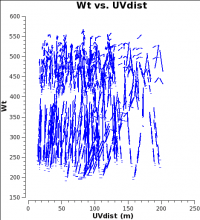 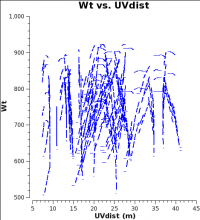 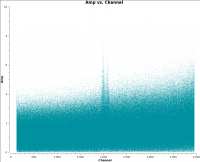 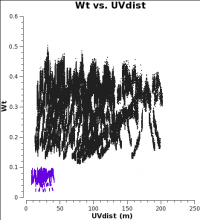