A brief summary of the CASA package.

CASA (Common Astronomy Software Applications) is the data analysis software package for the next generation of radio telescopes, specifically ALMA and the EVLA. It can also be used to process archival and current VLA data. CASA performs end-to-end processing of the large datasets resulting from these new telescopes: from data calibration to image analysis. Detailed information is available in the CASA Cookbook, which you can download from here. The package is still under development, and full functionality is not yet available. Check with the CASA homepage to find out the latest status of the project.

CASA stores data in a Measurement Set (MS). Logically, it is a generalized description of data from any interferometer or single-dish telescope. Physically, it is several tables in a directory on disk. Tables in CASA are actually directories containing files that are sub-tables. If you create a MS called 'AM675.ms', the sub-tables are stored in the directory AM675.ms/. Calibration solutions or images will also be written to disk as directories and sub-directories.

The MAIN data table is arranged so that each row is a single timestamp for a single spectral window and a single baseline. There are several columns. DATA holds the original visibility data, CORRECTED holds the calibrated data, MODEL holds the Fourier inversion of a particular model image, and IMAGING_WEIGHT holds the weights to be used in imaging. Occasionally, you will need to specify a column for a particular task, so it is useful to know about them.

An overview of the process from Loading to Imaging: 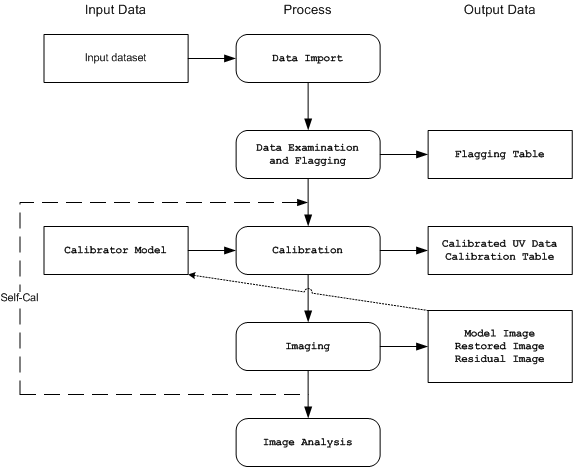 Data is initially loaded into CASA using one of three import tasks:

There are several tasks to list, plot and/or flag data in a MS:

During calibration, the user specifies a set of calibrations to pre-apply before solving for a particular effect (gain or bandpass or polarization). The user (not the task!) specifies a calibration table to store the solutions. Take care in naming the table for future use. Finally, the calibration is applied to the dataset, and calibrated data are written into the CORRECTED column.

At some point you want to actually see the model of the sky you have created from your data. The main tasks involved are:

Of course, you will want to measure things! Several tasks are available to help with this:

You can export your data from CASA using either exportuvfits or exportfits, which save the data in UVFITS or FITS formats, respectively.

About CASA: The CASA Cookbook, available from the CASA homepage: [[1]] Other documentation is there as well.

About Python: see the vast internet. Googling 'Python manual' will turn up a number of options.

Please send any comments or questions about CASA to the NRAO helpdesk via your my.nrao.edu portal.