This task creates a list of sources found in the 2D image created by CubeSum_AT. The output is a table which lists peak source positions and fluxes. An image is also displayed which shows where the sources are located.

Given the input from SFind2D_AT of source positions, the statistics of the image from CubeStats_AT, the moment map created by CubeSum_AT, and the initial input image, this task computes the spectra of the cube at a specific point (or points). The output are averaged spectra at up to the three maximum flux value pixel locations in the cube.

From input spectra provided from the previous CubeSpectrum_AT task, this task detects segments of emission (i.e. spectral lines) based off RMS cutoffs. The output is then a list of potential spectral lines and spectra showing where the potential lines have been identified. Six plots in all are created; a peak intensity spectrum, a minimum intensity, the three spectrum provided as inputs from CubeSpectrum_AT, and a Signal/Noise plot. For each plot, the potentially identified lines are overlaid on the spectrum and the amplitude is given as a multiple of the noise (either Peak/Noise or Minimum/Noise; Figure 5) 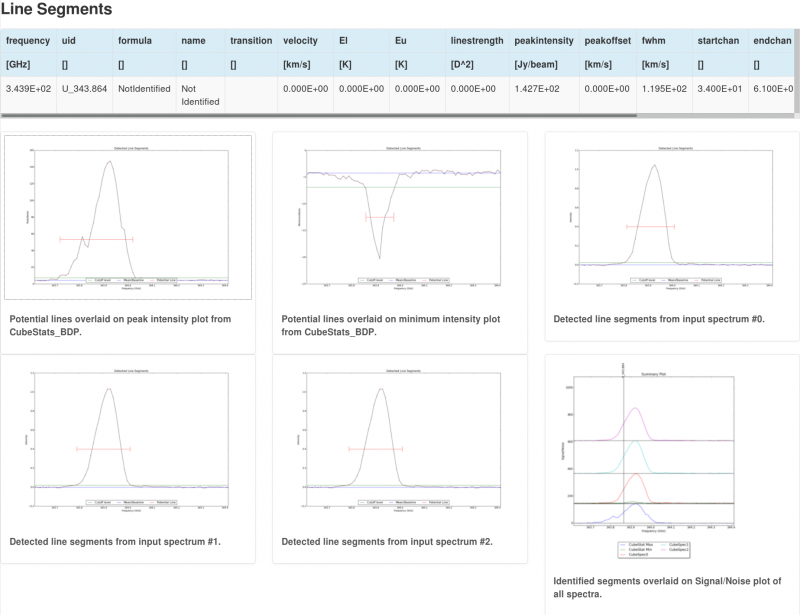 ADMIT output from the LineSegment_AT task which identifies parts of the spectrum that contain line emission.