Multiple configurations, or an observation in one 12m configuration plus one ACA observation, or other combinations, can be simulated by running sim_observe for each, and then combining the Measurement Sets to run sim_analyze. Total power observations can be simulated either in an independent run of sim_observe, or along with an interferometric simulation. Note that if you simulate total power and an interferometric observation simultaneously with sim_observe, they must have the same set of pointing centers and the same integration and total time, which is probably not realistic. (For example it is generally recommended to observe a larger area by 1/2 primary beam in total power mode to combine with a 12m ALMA mosaic).

We'll use an Halpha image of M51 as an example model sky. Download File:M51ha.fits.txt and place in your working directory, or use the curl command in the script.

sim_observe will make a copy m51c/m51c.skymodel, and not modify your input image.

Although the image has a world coordinate system, we want to override most of the parameters. 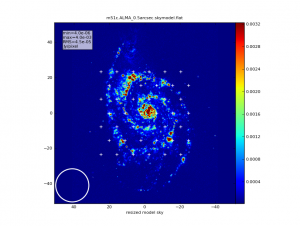 We'll begin with the 12m ALMA array observation, and have sim_observe calculate a hexagonal mosaic of pointings.

The default interface for sim_observe provides an integration parameter, which is the dwell time at each mosaic pointing -- we'll set that to 10s. A real observation would integrate a scan of ~5 min at each mosaic pointing; we could set integration="5min" but then for data volume and speed, sim_observe would only generate one measurement per 5min scan. While thermal noise levels would be scaled correctly, corruption of the data with a phase screen, or the details of uv coverage, would not be realistic. Rotating through the mosaic more rapidly than a real simulation will result in more representative uv coverage. If you wish to simulate the more realistic case such as 5 min scans with 5s integrations, please see Complex pointingtable for a guide to doing that with sim_observe (Its not hard, it just takes two calls to the task instead of one).

sim_observe can determine what array configuration to use, if you provide a desired resolution or synthesized beam size.

run sim_observe, displaying graphics to screen and file (files can be found in the project directory, e.g. m51c)

Next we'll simulate a total power raster map of the same area, but on a more realistic square grid. CASA simulation tools can not simulate true on-the-fly mapping (with smearing on timescales smaller than an integration time), but a square grid with a short integration time will provide a very accurate approximation.

We need to change the pointing calculation to make it square and a bit larger than the interferometric map.

We'll observe on a different day (this doesn't really matter, but if you choose to simulate two different 12m ALMA configurations and combine them, if they're simulated on the same day with the same antenna names you will have issues concatenating the datasets, so its a good habit to change the day)

We use sim_analyze to take the three measurement sets and create a single image.

There are many ways to do this, and the project is NOT making any recommendation yet at this time about what is optimal. Please discuss with your ARC contact scientist if you have ALMA data now, or wait for additional recommendations to be posted here over time. 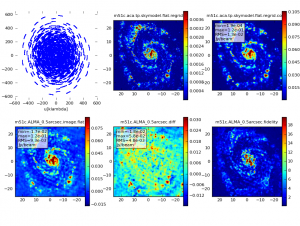 Here we explicitly have to set the modelimage to the previous output.